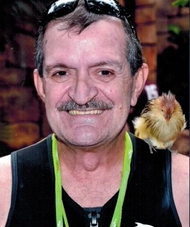 Armand Gerard “Jerry” Beardsley, 67, of Va. Beach passed away on June 2, 2016 after a long battle with lung cancer. He was born in Haverhill, Mass. the son of the late Harvey Beardsley and Florida Wieberdink, as well as having his formative years shaped by his step-father the late, John Wieberdink.
Left to cherish his memory are his wife of 46 years, Dianne; son, Mike & wife Michelle; grandchildren, Corey and Kayla; son, Scott & wife Lisa; granddaughter, Maddy; son, Chris & wife Ami; granddaughter, Rosalie; and his “furkids” cats, Lance and Jordan. Also his brothers, Doug & wife Pat; brother, Jeff; and sister, Pat. He was predeceased by his grandson, Mathias.
Jerry proudly served his country as a Sergeant in the Marine Corps, bravely fighting in the Vietnam war. He was so proud of his 3 sons for serving their country in the Marines and Coast Guard. He spent many years coaching his sons at Azalea Little League, also enjoyed fishing, disc golf and bowling. He loved his Boston Red Sox. Due to his illness, he retired from Gregorys Fleet Supply.
Special thanks go to his nurse, Keri and his aide, Nicole from Compassionate Care Hospice for their kindness and care they gave Jerry during his final days. He will truly be missed by all.
His family will receive friends at Altmeyer Funeral Home, 5792 Greenwich Rd, Va Beach, on Sun. June 5, 2016 from 2:00 pm to 4:00 pm. A memorial service will follow in the funeral home chapel. Online condolences may be given to the family at www.altmeyerfh.com
As per Jerry’s wishes *Please dress casual*
Semper Fi Marine

JERRY YOU WILL BE SO DEARLY MISSED, BUT WE WILL HAVE OR CHATS IN MY DREAMS.YOU HAVE BLESSED SO MANY LIVES WITH YOURS,AND NOW IT IS YOUR TURN TO REST. YOU ARE AWLAYS IN MY HEART AND MY MIND… YOUR LITTLE SISTER PATTY.

The light you gave us will never go out Cuz Jerry we have been blessed to have spent sometime on this earth with you, we will always love you and miss you. Helen E

I have visited this page several times, watched your Memorisl video and still I have no words that can describe my feelings…. Tears are flowing … I am so happy that I had the opportunity to chat with you not too long ago . So many family members have left us…. Especially in this last decade… Each time another passes my heart hurts a little more….as we age we know that our day will come to leave this earth and go to that beautiful place in the heavens…. It does not make it any easier for the people who are left behind… But we can only hope that we leave an impact on this world and the ones we love like you have… I wish I could be there for your services… Know that I am there in sprit … May you rest dear cousin without pain and burdens ….. God Bless….. Always and forever .
Your cousin Robin

Jerry you will be missed, my thoughts and prayers for your Family, you fought a good fight and I am going to keep fighting mine. RIP my Friend.

Cousin, since we played as little kids, grew up and joined the Marine Corp together,went to the Nam, had more experiencies together that made me respect you, be proud of you, and Love you, this is a crushing blow on my heart. I know your pain is now ended, your battle is over. Diane, Mike, Scott, Chris, my Love & prayers are with you!

My heartfelt condolences to Jerry’s family. May you find comfort and peace in the precious memories of your husband, father, brother, grandfather, and uncle, and by trusting and relying on the God of all comfort (Psalm 83:18) who is close to the broken-hearted, saving those who are crushed in spirit.

Jerry I will miss you… wehave been friends for over 30 yrs….I remember all the good times you, me , Dianne and Ben had….You will forever be in my heart and one day I will see you and Ben fishing, thats where Dianne and I will look for you two…God Bless you my friend,

You were a great brother in law. May you rest well.

You were a great man Uncle Jerry. You will be greatly missed.