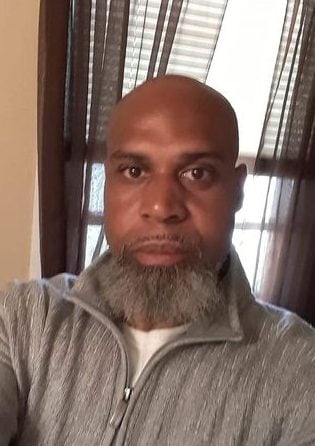 Antonio Freeman (Man), age 48 transitioned Monday, March 7, 2022. He was born on August 8, 1973, in Portsmouth Virginia, to Helen F. Freeman and the late James Chisholm, Jr. Tony is predeceased by his Grandparents Raymond L. and Dorothy Mae (Byrd) Freeman. Uncles Tyrone, Princeton and Raymond Freeman. Ex-wife Chanda D. Taylor and a partner Ashley Freeman.
Tony graduated from Manor School (Portsmouth, Virginia), Class of 1992. He was an all-around athlete and throughout his high school career participated in football, wrestling, baseball, and track. He was very popular with the ladies and went to several proms. Following his graduation, he served proudly in the United States Army from 1992 -1994.
Tony is known for his immense love of family, he adored spending time with his family and friends laughing and joking. He enjoyed a home cooked meal, listening to R&B music and dancing. Tony was a believer in Christ and read his bible often.
Tony leaves to cherish his memory his Mother Helen F. Freeman, Sister Cynthia (Princeston) Ross, Children Cierra Stiles, Senta Stokes, Deja Stokes, Dazaya Edwards, Yesmine Edwards, Shakira Wiggins and Mo-kei Edwards. Grandchildren Cieasia and Cieonte Stiles, Juliano Stokes, Qahaari and Norieli Andrews, Jaxon Anderson and Ky’mir Lee Young, Nephew and Niece Messiah and Makenzie Ross, Cousins Marie Freeman and Cassius Creekmore and a host of aunts, uncles, cousins, and friends.

Dad, I miss you so much. I wish you were still here with us. You loved so hard; it brought you joy making others happy, and gosh did you love picking with people. I love you daddy. I LOVE YOU. Rest In Peace ❤️

May your memories of Antonio Freeman, give you peace, comfort and strength…

You will truly be missed. Rest in paradise.