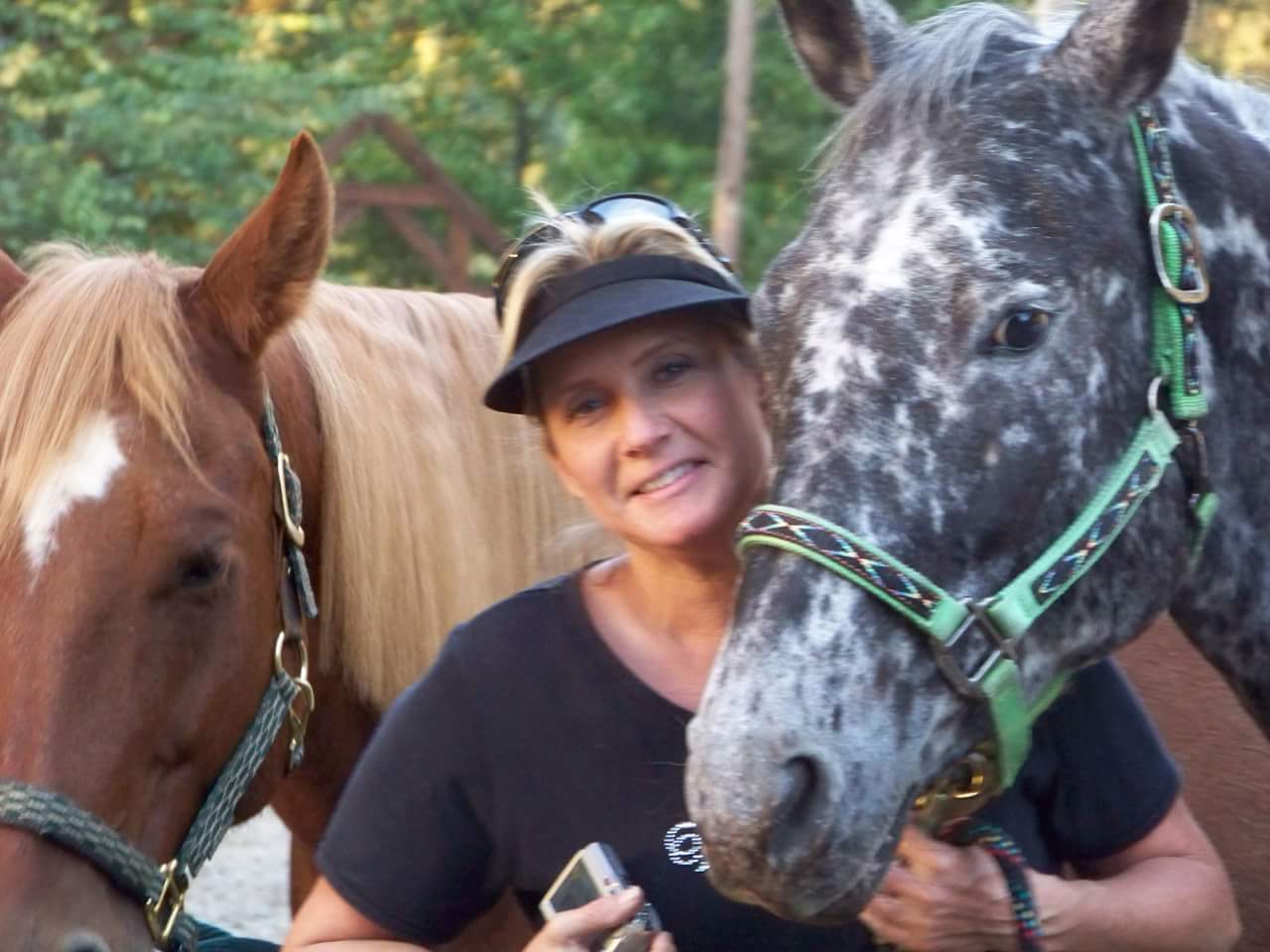 ANGELA BELL VOLIVA
CHESAPEAKE- Angela Bell Voliva, 50, died in her home on January 1, 2016. She was born in Virginia to Isaac and Delores Bell.
Angela was a clerk at HRSD. She retired after 35 years and 11 months.
She was predeceased by her husband Merrill Wayne Voliva and is survived by a son Anthony Bell Voliva; daughter Savanna Bell Voliva; her parents, Isaac and Delores Bell; and two sisters.
Angela loved and rode horses all over the east coast. Angela also leaves behind her beloved horse Freckles.
A visitation will be held at Altmeyer Funeral Home, 5792 Greenwich Road, Virginia Beach on Friday, January 15, 2016 from 12:00pm to 1:00pm with a Celebration of Life service to begin at 1:00pm with the Chaplain Ashton Otey officiating. Burial will follow in Rosewood Memorial Park.
Condolences may be shared with the family at www.altmeyerfh.com.

My Birthday ride at Greenbrier Farms

You will be missed ,my prayers are out to your family and the rest of your good friends. You are now in a peaceful place .

So sad to hear the passing of Angela. I worked with Angela at Regal. She was a lot of fun. Angela will be sadly missed by all who knew her

Sometimes you never know the value of a moment Until it becomes a memory A Memory no one can steal ! You are Missed . My prayers go out to Tony ,Savanna & Family.
Dr. Seuss

I am so sad for the Bell family’s loss. Angie died way too young. She was loved and will be missed by her two children, Tony & Savannah, her parents and her twin sisters, Lisa Bell Hundley & Laura Bell Okonkwo. She loved her horses and rode as much as possible the last years of her life. No parent should ever have to bury their child and no child should have to bury a parent at such a young age. My prayers are for Tony and Savannah and Angie’s parents and her sisters. She was loved and will be missed by all of her family and friends. There is only relief that she is NO longer suffering in pain, and her spirit will live on to watch over her family. I pray that her children seek spiritual guidance and grief counseling. This is an extremely difficult time for anyone to deal and especially hard for any young person or persons. Please know that she is NOT gone, she is resting and at peace. She loved her family and her animals. Now, she is able to watch over all that she cared about without suffering in her physical body that failed her. We are given a body to use in this lifetime and unfortunately, hers just was NOT strong enough to fight any longer. I admire that she committed to riding her horse and going on weekend trail rides with her friends and got pleasure from those times. I am praying for her children’ well being and ability to ask for help from their spiritual guide and/or counselors. I pray for her parents and for her sisters, Lisa and Laura. Thankfully, Lisa and Laura have supportive husbands who will help them with the despair of this loss. Rest in Peace, Angie.

Sorry for the loss of your dear love one. We have a wonderful promise to look forward to in the near future. God will swallow up death forever and wipe the tears from all faces. (Isaiah 25:8) It will be a grand time when death and sickness will be no more. This wonderful promise will take place only by means of God’s Kingdom. (Matthew 6:9&10)

Angie, thanks for the great memories of our rides together. The best is last year on New Years day at York River. We all had so much fun, and laughed so much. All though you were in pain you still had a smile and were determined to enjoy every second! Thanks so showing us all how important life is, never give up and keep smiling. Until we ride together again my friend, you will be greatly missed!

My sweet friend Angie, you were one of the strongest women I have ever know. I am so thankful for all the memories we made together as neighbors, mothers, horse lovers and friends. Not a day will go by that I won’t think about you and smile…….

I met Angie when she was a teenager. She was like a little sister. She baby sat my daughter, now 41, when she was 6. We were roommates for a while on Plainsman trail.
We even let her parents live with us. She came by my work place in Portsmouth in the early 90s to kick back and take her break when she drove for HRSD. I will miss you, Angie, but I will see you again. I won’t tell you mother we used to sneak cigs in the hall bathroom before we wised up and quit. Farewell for now. All my love, Henry

Angie Bell Voliva was a fighter she fought cancer hard for along time . Angie won her Battle she is with God . You all are in our Thoughts and Prayers at this time and always.