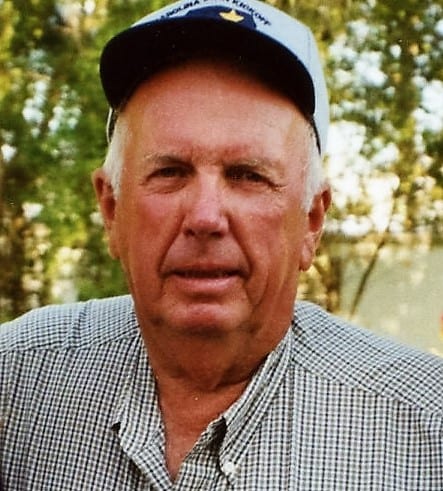 Visitation one hour prior to funeral service.

Alton L. Hudson, 87, peacefully passed away on November 30, 2016 at his home in Virginia Beach, Virginia. He was predeceased by his parents, Jesse and Levada Gibbs Hudson, and sadly, his beloved daughter, Donna Lee Hudson Hastings.
Al was born in Tyrrell County, NC. After graduating high school, he attended Wake Forest University. Al moved to Norfolk in 1952, where he met and married the love of his life, Jane “June” Carter. He served in the U. S. Army from 1954 until 1956 and was stationed in Germany for the majority of his service. After the Army, he went to work for the U. S. Government, working at the Naval Air Rework Facility in Norfolk until his retirement as a General Foreman in aviation electronics in 1985. After retiring, he moved back to North Carolina, a place he had always considered his home.
While living in Norfolk, he was an active member of the Kempsville Church of Christ, serving as a deacon for many years. Upon returning to North Carolina, he became active in the church he had attended in his youth, the Fairfield Christian Church.
Being with his family was Al’s greatest pleasure. He also enjoyed hunting, fishing, and gardening.
In addition to his wife of 63 years, he leaves behind to cherish his memory, two daughters, Carol Hudson Ormond and her husband, Alan, and Jay Anne Hudson and her partner, Bernie Wargo, and his son-in-law, Jack Hastings. He is also survived by two very special granddaughters, Karen Hastings Clayton and Kelley Hastings Denny, and six great grandchildren.
Funeral services will be held on Saturday, December 3, at 11:00 a.m. at Altmeyer Funeral Home, Chesapeake Chapel, 929 S Battlefield Blvd. in Chesapeake with visitation one hour prior to service time. A graveside service will be held on Sunday, December 4, 2016 at 2:00 pm at Fairfield Cemetery in Fairfield, NC. Condolences may be left for the family at www.altmeyerfh.com.

I WILL ALWAYS REMBER AL AS MY FAVORITE GENERAL FOREMAN IN ELECTRONICS BRANCH. PRODUCTION SUPERINTENDENT

My love to Aunt June, Carol and Jay!! Love you with all my heart! Uncle Al will be missed! So many memories with him! He loved us so much!

Our hearts and prayers are with you all. We are here to help in anyway we can. He was a good man and we know he will be missed. Love and friendship always. Mike and Lydia

Our thoughts and prayers are with you and your family. Please let us know if we can be of any assistance.

Dear June, Carol, and Jay,
I am very sorry to hear about your loss. My love and prayers are with your family.

The entire staff of Heartland Hospice sends your family our heartfelt sympathies as you celebrate Mr. Hudson’s remarkable life. We continue to be available to support you as you grieve in your own unique ways.

Carol, I was sorry to hear about the passing of your father. I know you are proud of him and the life he led. Our thoughts and prayers are with you.

To
June, Carol, and Jayanne, we are sending our deepest sympathy. Please know we would be to the funeral but will be out of town for several days . Our prayers and thoughts will be with you. God bless….

Jerry and Joyce Faison and family

Hi Carol…what a wonderful life your father lived. Our thoughts and prayers are with you and your family.