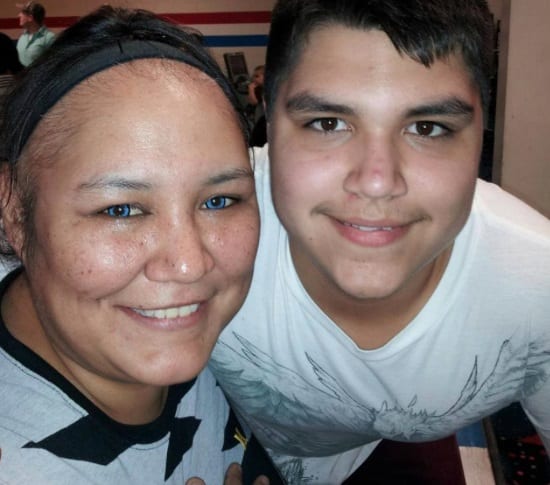 Allison Michelle Cabral, walked on January 1, 2016 at the young age of 37. She was born on November 29, 1978, in San Diego, California, in the Balboa Navy Hospital.
Allison was a resident of Virginia Beach, Virginia, she was of Portuguese, Japanese & Native American descent. She is the daughter of Arnold Roy Cabral & Beverly Cabral; granddaughter to Hazel Pontiac John & Joe John, both deceased; and Norman Stanley Cabral, deceased, & Irene Satsuki Cabral. Allison was a member of the Little Traverse Bay Band of Odawa Indians from Harbor Springs, Michigan.
Allison is survived by her life partner Laura Owens; her son Mannie Mandoka; her son’s father, Gary Mandoka; her brother Jonathan Alan-Pontiac Cabral; her nieces, Brianna Kazu Cabral, Aurora Chumani Cabral of Virginia and Kierstyn Cabral of Michigan.
Allison attended Salem High School and received her G.E.D. She enjoyed swimming, roller skating, surfing, going to the beach, going to the movies, bowling, shooting pool, spending time with her friends & family and was a big Green Bay Packers fan!!
Allison was adventurous, athletic, outgoing, opinionated, funny, and protective. She believed in a higher power and was always herself. She was the biggest free spirit anyone ever knew! She wanted to be remembered as the way you knew her: fun, loving, caring and a great partner, mother, daughter, sister, aunt, granddaughter and friend.
A memorial service to honor Allison’s life will be held on Thursday, January 7th at 2:00 pm in Altmeyer Funeral Home, 5792 Greenwich Road, Virginia Beach, VA 23462.
Condolences may be offered to her family by leaving them below.
The family wishes that memorial donations in Allison’s name be made to the American Cancer Society by visiting Allison’s memorial tribute here: In Loving Memory of Allison Cabral

My condolences to Laura and Allison’s family. Though I’d only known you a few short years, Allison, you greatly impacted my life. I will always remember the times we spent together and the great conversations we had. Love and light, Allison!

You were a ray of light here on Earth. No doubt Heaven is shining brighter now that your light is there. Shine on!

coming to work everyday and hearing her say what is up chica, she made me laugh when i wanted to cry and she was the sweetest person i have ever known

My thoughts and prayers are with all of Allison’s family at this most difficult time. It’s never easy losing anyone, but losing a child has got to be the worst pain ever. You have my prayers and hugs..

I wish he hadn’t taken you from us so soon. You were one of the happiest and realist people I have ever had the pleasure of knowing. My heart goes out to you, Laura, Manny, and the rest of your family. I love you Chica. Keep watch over us. We will forever miss and remember you.

My condolences to the Cabral Family upon the passing of Allison. May you always hold fond memories of her life with you. Please know that my thoughts and prayers are with you all during this tragic time.

Allison, you have always been an amazing, loving, and hilarious person! God has gained an AMAZING Angel. You and Paul W. are up there in heaven cutting up and being the best of the best! Love you mama and will see you again one day!!

Allison, you have always been an amazing, loving, and hilarious person! God has gained an AMAZING Angel. You and Paul W. are up there in heaven cutting up and being the best of the best! Love you mama and will see you again one day!!

Love and Light Sweet Allison. The REALIST person ever. The world will miss you and that great smile. PEACE BE WITH YOU Angel.