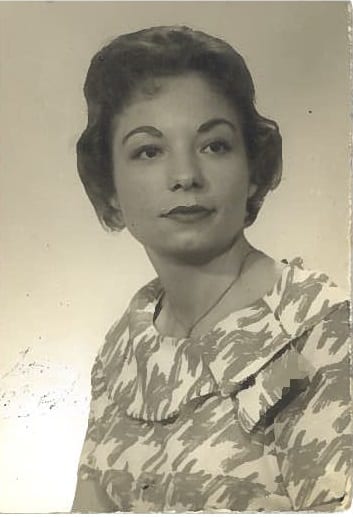 Aldine Jean Peterson Sawyer left this world to join her husband, William John Sawyer on December 10, 2015.  She died peacefully at Consulate Health Care in Norfolk, where she had resided since 2014.
She was born July 24, 1931, the youngest of five children of the late Carl and Ida Peterson in Meadville, PA.  Siblings are as follows:  Merle Leroy Peterson, Elizabeth Mae Peterson Laycock MacIver, Flossie Peterson Parker Snyder Lydia, Laverne Henry Peterson.
Mrs. Sawyer was married to William John Sawyer for 26 years before his death in 1979.
Mrs. Sawyer was a member of The Fairfield Garden Club. She enjoyed spending time with family and friends.  She will be greatly missed.
Surviving are 2 children: Dalton Lee Sawyer (Linda Ruth Sawyer) and Deana Lynn Sawyer Ralph  (Phillip H. Ralph); six grandchildren; Krista Sawyer Schriner, Cheryl Sawyer Boyd, Allison Sawyer, Leah Sawyer, Sarah Madison Ralph, Catherine Mackenzie Ralph; and 6 greatgrandchildren; Haylee, Ashley, Gregory, Dilon, Kianna, Noah.
There will be no public calling hours but a Funeral service will be held Thursday, December 17, 2015 at 11 am at Altmeyer Funeral Home located at 5792 Greenwich Road in Virginia Beach. Online condolences can be directed to the family by visiting altmeyerfh.com.
A special thanks to the staff at Consulate Health Care of Norfolk and Medi Home Health and Hospice who cared for Aldine Sawyer. She was treated with love and respect. Thank you!

Deana, Phil, Maddie, MacKenzie & family,
Our thoughts and prayers are with you all during this very difficult time. We know your mom (Nana) will be greatly missed.
We love you all,
Scott, Beth, & Kyle MacFarlane

Sorry for Lost. Our Prayers are with you and your family.
Bernard and Dawn Wade

My thoughts and prayers are with you and your family Deanna during this time of sorrow!

My thoughts and prayers are with you and your family Deanna during this time of sorrow!