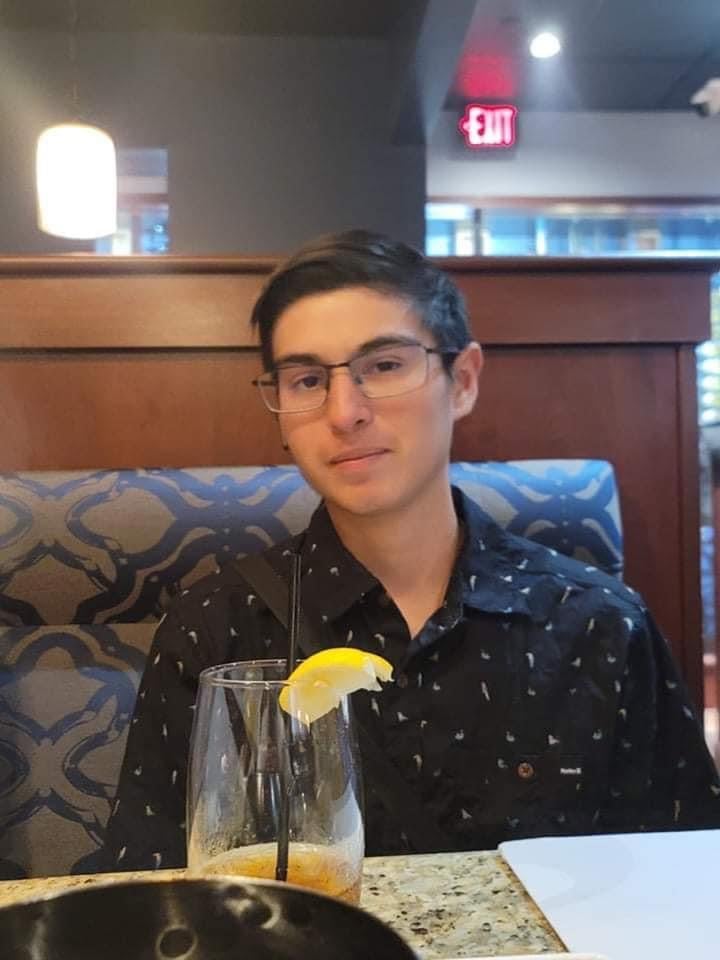 Abran Javier Velazquez, 19, of Newport News, Virginia, passed away unexpectedly on Saturday, October 29, 2022, at his place of residence.

Abran was born July 19, 2003 in Andrews AFB, MD to Air Force Veterans Jaime Velazquez Jr.and Frances M. Castillo. Abran’s travels would take him from Andrews AFB, to Valdosta, GA, to Austin, TX, to Severn, MD, and finally Newport News, VA where he would graduate from Menchville High School as part of the Class of 2021.

Abran was born a healthy baby boy and grew up spending most of his younger years attending church under the Assembly of God Ministries. While attending a Christian concert with the York Assembly youth group, Abran became very ill. Upon his return home, his family would discover that Abran was diagnosed with Type 1 Diabetes at the age of 11 in the early part of 2015. This diagnosis would prove to be the most challenging part of his life. Abran was an awesome young man! He was hilarious, insightful, compassionate, and strongminded! He was a young man that knew what he liked and was not afraid to show it. He had a great love for Star Wars and could dissect every part of all the films! He loved collecting Funko Pops most of which reflected his greatest likes such as Star Wars and DragonBall Z. He loved to hunt, fish, and ride ATVs. He was a great artist and drew many of his favorite characters. He loved to play video games and chat online with friends. He aspired to be a chef and spent time perfecting his favorite recipes like chicken alfredo, chicken pot pie, and Japanese katsu. Abran graduated from a culinary class and was voted most improved in his class. He was fond of the Japanese culture and inspired by traditional dishes. He loved watching movies and being able to discuss his favorite scenes and scripts. Abran was very aware of politics and followed updates to which he loved sharing his opinion of. He was proud the day he got to vote at the age of 18. But most importantly, Abran loved his family! He embraced his Texas family roots and displayed them proudly! Anything that would resemble the Texas family lifestyle, he held on to dearly and closely.

Abran is preceded in death by his Great-Grandmother: Frances Euresti, and Uncle: Roger Euresti. He is survived by his mother: Frances M. Castillo and partner Stephen Cates, his father and stepmother Jaime and Bridie Velazquez, his siblings: Elias, Amaya, Taylon, and Vyolet. Abran is also survived by his grandparents: Michael and Debbie Esqueda, Edgar and Sandra Figueroa, Jaime and Bianca Velazquez. Abran is survived by his Tia Jessica Castillo whom he referred to as the Best Tia Ever, Rebecca (Chadd) Adams, Yarivette Blakeslee, Adaliz Figueroa, and Yaleeza Patchett. Abran is survived by many Aunts, Uncles, Cousins, and Friends that are too numerous to name who loved him tremendously and his two cats, Freddie and Squeakers whom he cared for with all his heart!

Words cannot express the loss we feel for this unexpected passing. Abran’s character and love will forever be treasured in the hearts of all who loved him! As one of his friend’s stated,
“rest easy little stormtrooper!” Your memory will never be forgotten!

My deepest condolences to Marie and the rest of the family my prayers are with y’all in this time of need may God be with y’all and give y’all strength and comfort Abran will be missed but never forgotten. Marie I’m so sorry for the loss of your son Abran he was such a joy and very smart may God give you strength miha I know you are hurting but know that God is with you and the rest of the family.

My deepest condolences to the family of Abram. The little I remember of him was that he had a great smile, he was quiet, but you can see he was smart and intelligent. He was loved by all his family, especially by his grandma Debbie and the rest of his family in Austin. I pray God brings the family peace and comfort on your loss
I send my love to his mother Marie and his siblings, I wish I could be there for you all, but know I’m there is spirit. Love you all🤗
Abram is in the arms of our Heavenly Father, no pain, no tears, rejoicing in his presence. And with his loved ones who were there before him.
1. Thessalonians 4:13-18
“And now, dear brothers and sisters, we want you to know what will happen to the believers who have died so you will not grieve like people who have no hope. For since we believe that Jesus died and was raised to life again, we also believe that when Jesus returns, God will bring back with him the believers who have died. We tell you this directly from the Lord: We who are still living when the Lord returns will not meet him ahead of those who have died. For the Lord himself will come down from heaven with a commanding shout, with the voice of the archangel, and with the trumpet call of God. First, the believers who have died will rise from their graves. Then, together with them, we who are still alive and remain on the earth will be caught up in the clouds to meet the Lord in the air. Then we will be with the Lord forever. So encourage each other with these words.”
Lifting you all in my prayers 🙏🏼✝️❤️
‭

Your grandparents Sandra and Edgar

We will forever love you and miss you! RIP and rejoice in the presence of our Lord and Savior Jesus Christ. Until we meet again our sweet grandson

My heart is so sad, to hear of Abran’s passing, his mother’s first love, pride and joy. God be with you Marie. My deepest condolences to all his family.

Abran your grandma loved you so very much. She was always so proud of you. May God comfort your momma, grandma and your aunts. May your memory live in all of us. Until we meet again. Your grandma friend Lisa Garcia. Who adores your family. God bless the entire family. Austin TX.

Oh Abran, my heart hurts so much. I love you Grandma baby boy!

Oh, sweet Abran! You were like a cousin to my kids, another grandson to my parents, and a nephew to me! A young man of few words, but when you spoke, it was insightful, deep, and meaningful! You amazed your family with all your passionate cooking, and you LOVED your brother and sister so fiercely! This world is dimmer without your light. I love you and will miss you forever! God bless and soothe your family, especially your precious mama!

Words cannot express the sadness that I feel knowing that Pops is no longer with us. I will cherish every memory that I had with him. Abran was the first “baby” for all of us. He was the sweetest most adorable little boy who grew up to be a wonderful young man. Never forgotten, always missed and loved forever. Condolence and prayers to all my family.