What is a Memorial Paddle Out?

Coastal Virginia has a strong surf culture. You see the symbols on cars, on the back of people’s t-shirts in the checkout line, it’s in our art and on our children’s backpacks. Granted, they aren’t writing about our waves in the trade magazines but it’s us. For those of us that grew up here it’s been a constant theme. We surfed, our siblings surfed, our friends surfed and so did the “cool” parents. We have those crazy friends that go out in the middle of February with old milk jugs filled with hot water in their trucks for post-session relief from the numbing water. 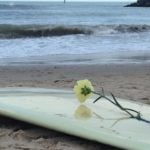 It’s always been a positive culture. What’s cool about now is that more and more of us are stepping up and encouraging children into the sport with youth groups and scheduled group lessons. We also help our community in Virginia Beach with surfing experiences created for those with hardships, such as Surfer’s Healing and Wave Warriors.

Even better, is that those that surf get together more than any other group to support those within their circle. They give back and it’s an “all for one- one for all” mentality. If a surfer has been diagnosed with an illness or a financial crisis around here- they immediately coordinate a fundraiser and everyone supports it- the local musicians, the restaurant and the social media posts orchestrate a swift “lift-up” for the individual and their families. It’s beautiful to see.

They memorialize differently too. A floating memorial in the water, known as a Paddle Out, takes place after someone dies. A Paddle Out consists of several surfers, also paddle boarders and kayakers, “paddle out” with flowers in their teeth and join hands to form a floating circle. One or more people offer words or remembrance about the departed and then the whole party erupts in smiles and cheers, splashes the water, throw the flowers into the water and, if ashes are present, spread them.

This ritual, the memorial paddle out, has an ancient feel and suggests it has roots in pre-historical Polynesia or Hawaii. Some historians disagree with that theory. Experts believe the phenomena was indeed birthed in Hawaii, but not as early. The ancient Hawaiians buried their dead on land and the first known paddle outs can be traced to early 20th Century in Hawaii, where they were undertaken by the “beach boys.” A group of watermen, sometimes called the “Beachboys of Waikiki” who worked in the hotels on Oahu, teaching mainlanders how to surf and enjoy the ocean. The oldest of them recalling the ritual only beginning in the 1920’s.

According to Surfer’s Journal founder and publisher Steve Pezman, also quoted by the Times, paddle-outs migrated to the mainland in the early decades of last century and “then spread along with the sport, especially in the late ’50s and early ’60s after the movie ‘Gidget’ came out,” notes the Times. Since then, this aspect of modern surf culture has reached every part of the globe where surfers reside.

Every Memorial Day weekend, here in Virginia Beach, the Virginia Longboard Federation includes a Paddle Out in the Steel Pier Classic to honor those that have made the ultimate sacrifice. President of the VLF, Mary Knight, included this beautiful ritual in the surf contest agenda in honor of her nephew who lost his life in Afghanistan and it grew from there. They’ve been doing it for over 15 years in the contest. Much longer for friends and throughout the year for those they’ve lost. The Memorial Day ceremony is led by Father Rob Cole of St. John the Apostle Catholic Church of Sandbridge. Some participants go in the water, others stand on the shore and have their moment on land. It is a beautiful tribute from our community to honor the fallen. I encourage you to go, bring your families and wrap your soul around the experience.